All About Our Crew

The Adventures of Patch the Pirate radio broadcast is recognized by the National Religious Broadcasters as being the third largest children's religious programming outreach. The listener-supported ministry is distributed free of charge. This outreach began with 45 stations and now enjoys more than 450 outlets, many of which repeat the broadcast several times during the week. Mission radio organizations including Trans World Radio, Caribbean Lighthouse, and other independent stations distribute the program internationally. The Adventures of Patch the Pirate radio broadcasts are underwritten by Majesty Music, in Greenville, SC. 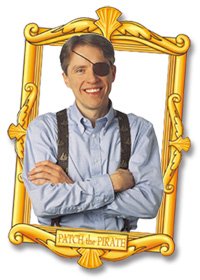 Every young boy dreams of becoming a cowboy, a fireman, or maybe even a pirate, and Ron Hamilton did too. He also dreamed of having a nickname that sounded dangerous and exciting—something like Buffalo Bill or Long John Silver.

“When he was 27 years old, his dream came true. On a routine visit to the eye doctor, something unusual was discovered in his left eye. After several weeks of testing, he was rolled into the operating room for surgery on his eye. As he slowly regained consciousness several hours later, his wife, Shelly, gave him the startling news. "The doctor found cancer. Your left eye is gone."

The doctor gave him his first eye patch, and suddenly he was a pirate! Kids were fascinated by my pirate patch. Everywhere he went children would call out to their embarrassed mothers, "Look, Mom! There goes a pirate!" The children in his church gave him a nickname that stuck-Patch the Pirate.

Looking back, he could clearly see how God prepared him for this experience. Several years before he lost his eye, God's truth had dramatically changed his life. Verses such as Romans 3:23, "All have sinned and come short of the glory of God," had shown him he was a sinner who needed God's help.

Then he read, "While we were yet sinners, Christ died for us" (Romans 5:8), and John 3:16, "For God so loved the world, that He gave His only begotten Son, that whosoever believeth in Him should not perish, but have everlasting life."

He knelt by his bed one night and told the Lord he was sorry for all his sin, and that night he accepted Jesus as his Savior. Since that night he not only had the joy of knowing that he was going to Heaven, but he also had the assurance that God is working all things together for good in his life.

Yes, he lost his eye to cancer, but God transformed the loss into a great blessing. The Lord gave Patch and his family an exciting ministry to families around the world through Patch the Pirate Story and Song albums. Today, Ron’s son-in-law and daughter, Adam and Megan Morgan, are continuing the Patch the Pirate ministry to reach the next generation. God has been so good!

You too can experience God's love and peace by turning from your sin and receiving Christ into your heart as your Savior. “There is no other name under Heaven given among men, whereby we must be saved" (Acts 4:12). Jesus Christ is the only one who can save us.

Will you receive Jesus Christ as your Savior? Your eternal destiny depends upon your decision.

May God richly bless you,

Rejoice in the Lord 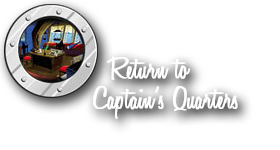